Kwanzaa is a week-long, African American holiday observance held from December 26 to January 1. Timed to serve as an alternative to the growing commercialism of Christmas, it was founded in 1966 by Ron Everett, a.k.a. Maulana Karenga, African-American activist and director of the Black Studies department at the California State University, Long Beach. Kwanzaa is not a religious holiday, but a cultural one, a syncretic festival, based on various elements of the first harvest celebrations widely celebrated in Africa, around the 10th month of the year. According to a survey conducted by the National Retail Foundation in October 2004, 1.6% of consumers celebrate Kwanzaa.

The name Kwanzaa derives from the Swahili phrase 'matunda ya kwanza', meaning "first fruits". The additional "a" was added to "Kwanza" so that the word would have seven letters, one for each of the Seven Principles, or Nguzu Saba, of Blackness. Each of the seven days of Kwanzaa is dedicated to one of the following principles. In order, they are:

As is customary with most holidays, hosts of Kwanzaa observances choose the best and most beautiful items to display and use. This means taking time to plan and select the most beautiful objects of art, colorful African cloth, and fresh fruits so that every object used represents African idealism and a commitment to the holiday in the best of ways. It is customary to include children in Kwanzaa ceremonies and to give respect and gratitude to one's ancestors. Often libations are poured, an African custom that has survived in the African-American community to this day. Celebrants are expected to arrive at the celebration with respect for its values, symbols and practices and to do nothing to violate its meaning. 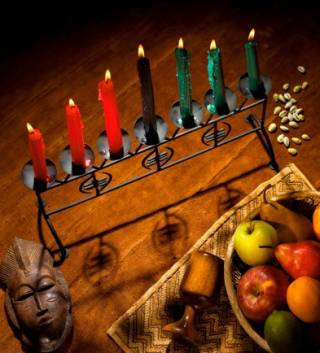 When Kwanzaa was first established, observers eschewed the mixing of the holiday or its symbols, values and practice with the holidays of any other culture. The feeling was that doing so would violate the principle of kujichagulia (self-determination) and thus violate the integrity of the holiday, which is intended, in part, as a reclamation of certain important African values. However, many African-American families who celebrate Kwanzaa also celebrate Christmas and New Year's, with both Christmas trees and kinaras inhabiting the same space. They view Kwanzaa as an opportunity to incorporate elements which speak to their particular ethnic heritage into holiday observances and celebrations during the Christmas season.

Kwanzaa has seven basic symbols. Each represents values and concepts reflective of African cultures. The basic symbols in Swahili and then in English are:

Mkeka (The Mat) The mat can be made of any material, but is frequently straw. Often red, black and green, the colors of the black nationalist flag, it is a reference to a West African aphorism, "No matter how high a house is built, it must stand on something."

Kinara (The Candle Holder) This is the symbol of African roots, the "parent people" of continental Africa.

Mishumaa Saba (The Seven Candles) These are symbols referencing the Nguzu Saba, the set of underlying values by which African people are urged to live in order to rescue and reconstruct their lives in their own image and according to their own needs. There are three red candles to the right, three green candles to the left, and one black candle in the center of the kinara. The colors, again, are symbolic of black nationalism: red is for the blood of the African people; green is for the hope of new life and for the motherland, Africa; and black is for the face of the African people.

Mazao (The Crops) These are symbolic of African fruit harvest celebrations and of the rewards of productive and collective labor during the October month.

Corn symbolizes children and the future which they embody.
Black nationalist flag

Zawadi (The Gifts) These are symbolic of the labor and love of parents and the commitments made and kept by the children.

A supplemental symbol of Kwanzaa is the bendera, or flag. The Kwanzaa flag is the red, black and green black nationalist flag.